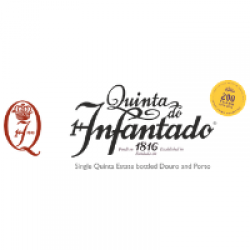 The Quinta do Infantado wines and Ports are grown, made and bottled at the Quinta (Estate), located in Pinhão at an altitude of 150m above sea level in the Cima Corgo, the Douro sub-region known for making the best Ports and dry wines. This winery was established in 1816 by D. Pedro IV, the Portuguese crown heir, as a place where they could collect taxes, which were then paid in grapes or wine. This is the origin of the Quinta’s name: Infantado derives from Infante, the Portuguese for Prince. The Roseira family has owned Quinta do Infantado for over a century. Joao Roseira looks after the vineyards and oversees the winemaking and his sister-in-law Paula looks after the marketing of their wines.