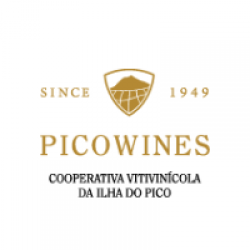 Pico Island, the youngest island in the Azores archipelago, is around 250 000 years old, which in the history of islands is relatively short time of existence. What this promotes geologically is a very rocky island, with perhaps 90% of the soil being made up of volcanic rock, little of which is deteriorated, meaning the wine and vineyard production grows in those rocks.

Historically, Pico Island is known and recognized as having sent fortified wines to several places in the world. Existing proof shows us that they were sent to the United States of America and Russia. Because of these historical facts, in 1949 a group of 21 winemakers decided to join and create the “Cooperativa Vitivinícola da Ilha do Pico”, in order to enhance, safeguard and improve Pico wines, both white and fortified. The continuity of this work is still seen today, with more than 250 associates. We continue to produce high quality fortified wines, an example of which are the “Licoroso 10 Anos” and “Licoroso 20 Anos”. We are an entity that wants to continue growing and put Pico and its fortified wines, once again, throughout the world, essentially because of the quality they present.

Losménio Goulart
+351 912 546 062
This email address is being protected from spambots. You need JavaScript enabled to view it.