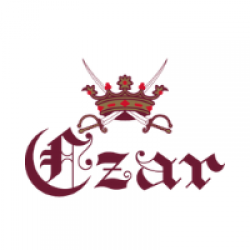 Licoroso wines from Pico have a long history, even being mentioned in Tolstoy’s War and Peace. Sadly mildew, oidium and phylloxera devasted the industry in the late 1800s and islanders turned away from wine production and instead lived off the ocean’s oil rich resource of sperm whales for income.

Most islanders including José Duarte (Fortunato’s father) continued to make table wine for family and friends. In the 1960’s José bought the Criação Velha vineyard (for the equivalent of five euros) and began making licoroso wines that are naturally more than 18% by volume. After José read about the discovery of Pico wine in the last Czar’s cellars, he decided that “Czar” would be the perfect name for his wine and from 1970 he started bottling his wines under the Czar brand. The informal approach to wine-making continued for several decades with bottles often being scavenged and re-purposed. Vintages did not appear on labels until 2000 and sales were mainly to locals and tourists.

After finishing university in 1989, Fortunato started making the wine with his father. He took over the business completely after his father passed away in 2007. As with his father and many islanders, winemaking has remained a part-time job.

Over the years, Czar has grown with the addition of three more vineyards as well as reinstating the rest of the original vineyard – the youngest part, closest to the ocean. Production is now 2-3,000 bottles on average although there have been years with less.

Czar has distributors on the islands of Faial, Terceira and São Miguel as well as on the mainland, in Lisbon and Porto. The company also sells directly to individuals in many other countries, mostly central Europe, but also Canada, USA and China.

Fortunato Garcia
+351 914 253 646
This email address is being protected from spambots. You need JavaScript enabled to view it.
< Prev Next >